Neelakandan (Mohanlal) is the heir to the well-known Mangalassery family. He squanders away his father's largess and good name, but is loved by the people who know him well. He has been the arch-rival of Shekaran of the Mundakkal family since childhood. During a minor ruckus, one of Neelakantan's aides accidentally kills Shekaran's uncle (Janardanan). This incites Shekaran to plan to avenge the death of his uncle.
Meanwhile, Neelakantan offends Bhanumathi (Revathi), a talented Carnatic dance graduate, by forcing her to dance in front of him in his house. In retaliation, Bhanumathi quits dancing and curses Neelakantan for desecrating the art so dear to her. Later he feels regretful and helps her family in many ways and tries to persuade Bhanumathi to take up dancing again, but she doesn't budge.
Meantime, Neelakantan visits his widowed mother intending to bring her back home, but she passes away after revealing a terrible secret; that he was born of another man, out of wedlock. This fact crushes him, and only Bhanumathi finds out this secret when he curses drunkenly (at the car of his deceased "father") that the ancestral heritage which he is proud of, is actually not his. She is surprised by the vulnerable side of Neelakantan.
He visits Banumathi at her home to persuade her to take up dancing again, only to be refused like before, telling him that she will resume dancing only after his death. That night while returning home from the visit, Shekaran and his aides ambush (by hitting him with a car from behind) and injure him seriously after also inflicting several wounds with swords and wooden sticks.
Neelakantan survives the attack, but his left hand and right leg are badly injured and as a cure he undergoes Ayurvedic treatment to rejuvenate his legs. It is during this time that Bhanumathi falls in love with him (she is also regretful for having cursed him, feeling a bit guilty that the attack was somehow related to her curse). Neelakantan convinces Bhanumathi to dance and he arranges for a dance event for her at Delhi. He refuses to marry Bhanumathi considering her future, but in the end she and Warrier (his elderly right hand man) persuade him to do so.
Neelakantan tries to forget all the past events and his rivalry with Shekaran, but Shekaran is not satisfied and wants to defeat Neelakantan in front of the whole village. For this he kidnaps Bhanumathi and forces Neelakantan to take blows in front of the public during a village festival organized by the Mundakkal family. Meanwhile Neelakantan's friends rescue Bhanumathi and after this Neelakantan mauls Shekaran badly and cuts off Shekaran's right hand, claiming "Shekeran, I want to live peacefully..." so that he will not again come up with revenge later... 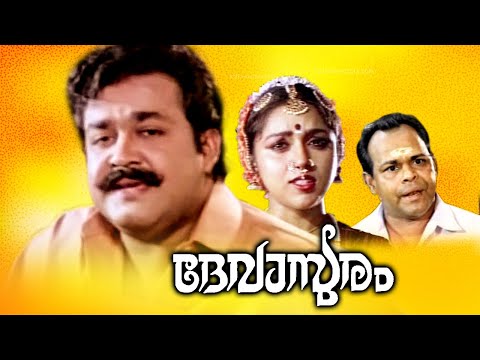