He released the book by handing over a copy to IT Department Principal Secretary P H Kurien, at a function inaugurated by Chief Minister Oommen Chandy. 'Nakshathrangal Akaleyalla' portrays the life story of Dr Santhamma Mathew, in which she narrates her journey from her childhood in the erstwhile central Travancore to her academic and professional achievements and her current life as a doctor.

Chief Minister Oommen Chandy inaugurating the function said that Dr Santhamma Mathew's experiences, achievements and contributions to the health sector would be inspiring to the readers. ''Her services in the health sector needs to be lauded. I also hope that the private medical sector will hold hands with the Central and State Governments to widen the reach of the health services to everyone who needs it,'' said Oommen Chandy.

The autobiography, takes the reader through Dr Santhamma Mathew's memories as a child, student, wife, mother and doctor, touching on different aspects related to Kerala and the important people who inspired her. Releasing the book, Tharoor said that an occupational hazard of being a minister is that ''you are releasing a lot more books than you have time to read.''

He hoped that the autobiography would provide guidance and insights to understand people and understand life especially for young medical students and others who are having a difficult time in life. Dr Santhamma Mathew has written many popular books on the subject of pregnancy and women's health, both in vernacular and English. 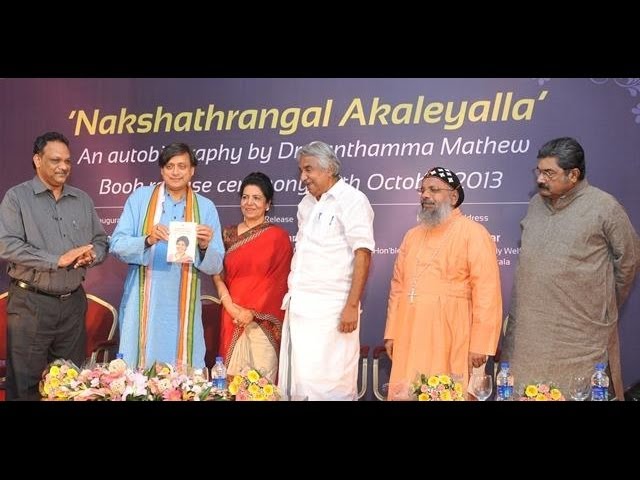